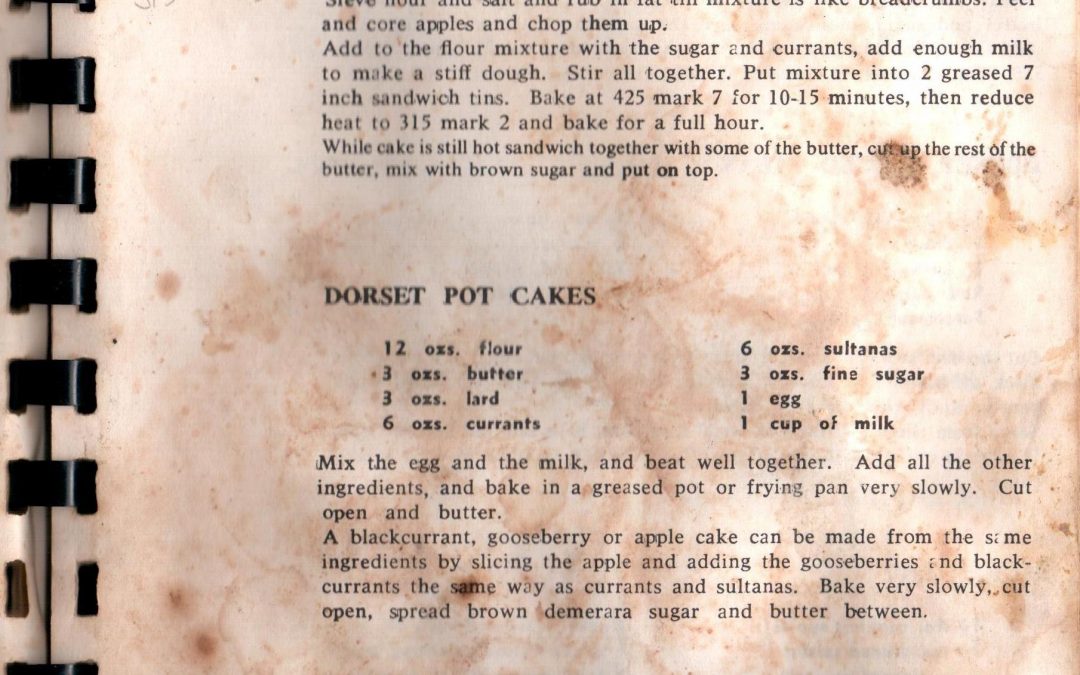 Cooking apples have been falling for a few weeks now. The sheep help them down by rubbing against the trees, others fall during little bouts of windy, rainy weather.  I usually turn to mum’s Dorset WI cookbook from the 70s at some point in the apple season. She made apple cakes in big, deep baking trays for her cream tea business. These were rustic cakes topped with a mix of butter and demerara sugar. She served them up with Dorset clotted cream. One time, my copy of the WI book got into Mark’s bookshelf and seemed unlikely to make it’s return.  So I looked up other recipes and found a soft, delicate version from Nigel Slater. Now, both recipe pages are easy to find, smudged with ingredients in the rush to make a cake and get it in the oven. The witness to a good recipe, I say.

Here’s the Nigel Slater recipe from The Kitchen Diaries, published in 2005 http://www.bbc.co.uk/radio4/womanshour/food/recipe226.shtml   The recipe was on the BBC Radio 4 Woman’s Hour website. Mum’s favourite listening on the Roberts radio in kitchen, garden or greenhouse. Woman’s Hour has had a long life, it’s nearly 70 and still going strong.

But that’s young compared with the Women’s Institute at 100 years old. When my mother joined in her 40s, she had a lot of fun, made friends. The WI recipe appeared in “What’s Cooking in Dorset” from the Dorset Federation of Women’s Institutes. Wonder if the WI would consider reprinting it? First printed in 1972, there doesn’t seem to be a copyright on it, so I took the liberty of scanning the apple cake page. My copy was almost certainly a Christmas present from mum. Didn’t realise I was such a messy cook. Mark’s pencilled in a metric conversion.

Take your pick from the recipes, rustic or refined, they’re both very good. On Sunday, the 25th, it’s community apple day in Melplash – home to Twinways Cyder Orchard and Filberts apiary. If you’re in West Dorset, come and join in an orchard walk, honey and cyder tastings, see who wins the apple cake contest.

Philada Rogers
Production and Office at Filberts of Dorset
Co-founder of Filberts, Philada manages production and day-to-day operations in the office.