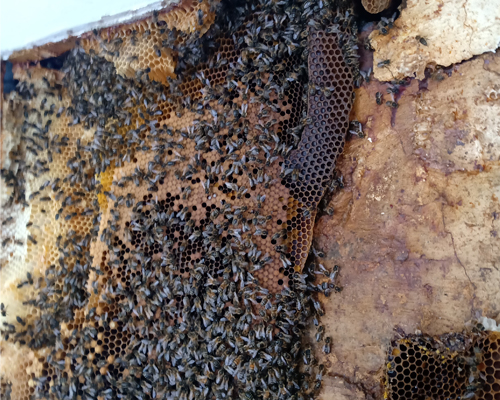 Mark doesn’t take on a lot of bee cut outs… unless of course our own bees go rogue on us and start causing bother. Gladly though, he was talked into removing this whooper a few months back. The colony had set up camp in the sheltered living room wall cavity of an old farmhouse near Bridport and it took some orchestrating to extract.  The bees were between an internal dry lining and a very old lime washed rough stone wall.  After cutting through from the inside the scale of the colony still wasn’t obvious.

These exceptionally well behaved bees were pretty relaxed about the whole thing though and all parties escaped largely sting free. The pics show what was visible and then what was concealed further down in the cavity. Two brood boxes, and four buckets of honey were removed.  Amazingly, given the size of the nest, the queen was spotted and the colony is safely rehoused in our bee breeding shed.  As the colony had done so well and were in good health we will probably breed from them.  So for now some close monitoring and more luxury, although maybe not quite up to the standard that she had become accustomed to. Once we are confident that all is well, either the eggs will be used to raise queens from or the drones will be raised to mate with queens from another bloodline. 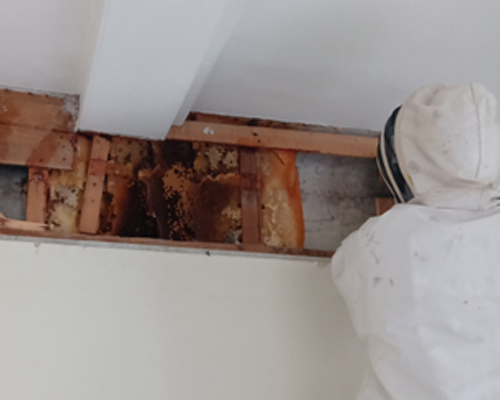 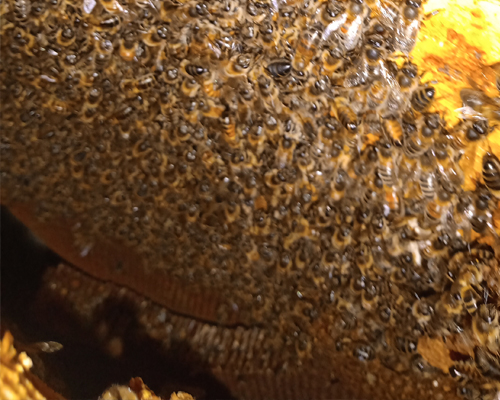 This photo, although a little blurry, shows the scale of the colony

Freya Baxter
Sales & Creative at Filberts of Dorset
The creative brains behind the quirky Filberts look. Freya also handles sales and orders in the office.